We are a bunch of passionate outdoor and environmental educators who want to promote connections and the creation of stories/culture between young people and nature through outdoor education activities such as rock-climbing, bushwalking, canoeing, bush skills, nature studies and much more.

Emmanuelle Dubuc:   Emmanuelle is originally from Canada and is very passionate about Indigenous Knowledge System and culture from back home. Her ancestry comes from “Les coureurs des bois” which were the first French to arrive in North America and lived in harmony with “Amerindians”, native people of Canada for 150 years. This history has strongly influenced the way she sees the world. She graduated from Latrobe University in 2014 with a degree in Environmental Education and  has twenty years of outdoor education experience with her speciality in rock-climbing: multi pitch, top roping, abseiling and rope access work. She holds First Aid level two and Level one rigging certificate. Emma contracts to Latrobe University as a hiking/camping guide and she is currently undertaking formal climbing guide qualification with the ACIA. She was also a participant of Lurujarri trail (Western Australia) in 2012 and 2013 and  has been a passionate advocate of Indigenous Land rights ever since.

Kia Smith:   Kia has a degree in outdoor Education Latrobe University graduating 2014, with a major in Nature Tourism. Kia is an experienced trip leader in hiking, camping and canoeing, and holds Wilderness First Aid qualification. She contracts to Latrobe university as a hiking/camping guide. Kia paddled the Murray in four months in 2015, and holds Australian Canoeing Guide certification. Kia now works for Parks Victoria as a ranger.

Tim Preston:   Tim has been a climber since 1990’s and is now designing and producing climbing equipment at Climb Design. Tim recently attempted a multi-day 300 m aid climb at Mt Buffalo but only made it half way. An experienced teacher, Tim loves to share his knowledge of climbing and equipment. He is in the process of formal climbing guide qualification with the ACIA. Tim brings his experience in small business and web / social media to Mirawara as well as guiding on climbing trips.

Rebecca Phillips:  Rebecca is a Djaara storyteller and a passionate advocate for Caring for Country and keeping culture alive. Rebecca volunteers on Djalli Bunjil (Language Knowledge) revival group and the Kapa Gatjin (Knowing Water) Advisory Group. She has ten years work experience in Parks Victoria as a Park Ranger, General Fire Fighter, Indigenous Education and Interpretation, TEK and Cultural Heritage Values. Rebecca has a Degree in Nature Tourism and a Certificate 4 in Aboriginal Cultural Heritage Management. She has lead cultural tours and awareness activities, women’s/youth cultural camps, cultural song and dance workshops and  works as a Cultural Advisor for Mirawara. She also has experience working with Victorian Traditional Owners in many aspects of Cultural awareness and preservation. 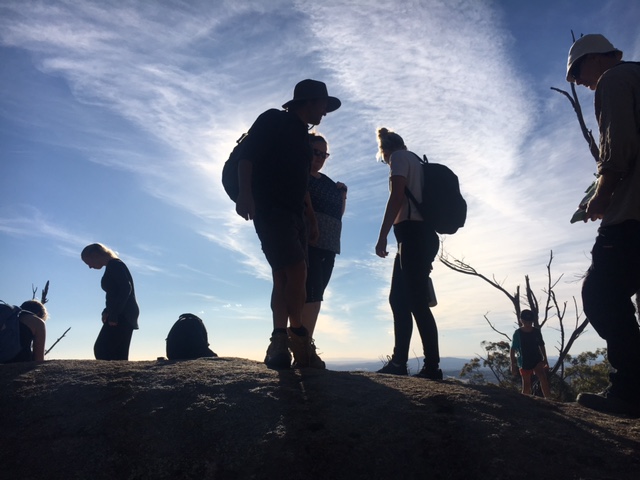